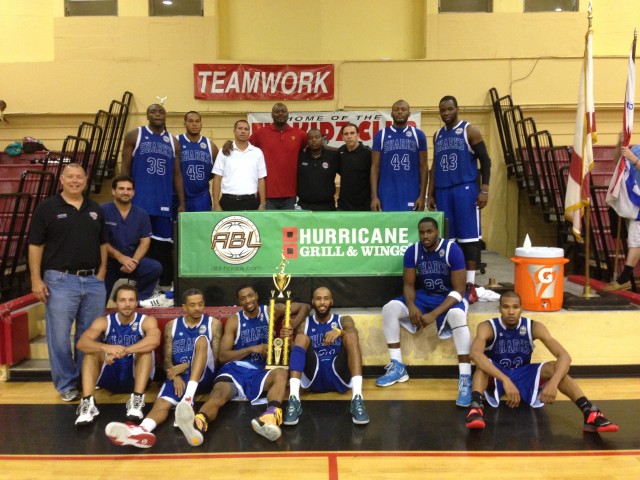 The Fort Lauderdale Sharks took everything they had to defeat the upstart Orlando Lightning, 90-84, in the 2014 ABL Championship game on Friday night.

Both teams entered the finals with identical records and had played each other even throughout the regular season.  The Lightning came in prepared to handle the Sharks stingy defense and had many chances in the first half to pull away from Fort Lauderdale.

The Sharks, known for their tenacious and swarming defense took a two point lead into halftime behind the long-range shooting of Martavis Kee, a former Florida International University standout.  Fort Lauderdale was able to get out and push their lead up to 18 points midway through the fourth quarter by a margin of 86-68.

The Orlando Lightning turned up the heat over the next three minutes and cut the lead to 88-81 with two minutes to go.  Fort Lauderdale head coach, Donovan Carter, called a crucial timeout to settle his team down and the Sharks eventually held off a stubborn Orlando Lightning team.

Leading the way for the Champions, Fort Lauderdale Sharks, were Calvin Joy with 22 points, followed by Matt Rolle with 20 points, and Martavis Kee with 17 points.

The Orlando Lightning were led by Anthony Poindexter, who recently signed a professional overseas contract with Belfast of Ireland, scored a game high 27 points and pulled down 5 rebounds.  Ronnell Grant chipped in with 17 points in defeat.

COMMENTS
This article has No Comments.
Be the first to add your comments!
Click the "Post a New Comment" button below.
firstname lastname commented Just Now
×
"body"


Inappropriate comments will be removed by League and Team Managers.